The subject has been out there in plain sight for as long as forteans have puzzled over accounts of otherworldly encounters, but hardly anybody has paid it much attention, with the notable exception of the controversial Joe Simonton CE3 from 1961, when a Wisconsin man claimed that UFO occupants handed over fresh pancakes in exchange for a jug of water. When analysed, the contents proved disappointingly prosaic, which given Simonton’s manifest sincerity – the sort of complication that makes the anomalist’s life so interesting; vexing, anyway – did not quite close the matter. Then again, if you insist that every question has an answer and every door is there to be shut, you aren’t a fortean.

Cutchin, whose first book this is, is a fortean in the fullest and finest sense. He has ideas, and they’re creative and provocative ones, but he doesn’t insist they’re certainly, or even probably, true. He thinks the entities in these narratives are in some sense “real” but that our perceptions of them are filtered through culture. Most forteans these days hold to some version of that hypothesis, but he is among the first to imagine that the food allegedly consumed in these alleged encounters is a drug akin to DMT, able to alter brain molecules and manipulate the senses.

“In order to facilitate these changes in neural chemistry,” he proposes, “these entities often draw upon the human race’s rich symbolism of food and drink, offering ‘food mirages’ which elicit a change in consciousness in the observer. These simulacra are directly projected into the mind, an extension of the entity itself… and are used to initiate, strengthen, sustain, or – most commonly – end an encounter.” While I have no opinion on the soundness of the proposition, I appreciate the modesty with which Cutchin advances it. You can read A Trojan Feast with enjoyment and respect even if you reject the theory as daft.

What Cutchin has done is to survey a fairly staggering range of literature on folklore, anthropology, food science, psychedelics, ufology, and cryptozoology, seeking people’s claims to have consumed something – food, liquid, pills – in the course of an extraordinary encounter. He opens with a chapter on the food taboo in fairylore, then moves on to Sasquatch cases. Most of the rest concentrates on CE3s, abductions, and hallucinogenic visions.

I hadn’t run into the term ‘habituation’ before (evidently I’ve fallen behind in my esoteric reading), but I learn it’s employed to characterise instances in which people, ordinarily owners of remote rural property, tell of engaging in some kind of relationship with a resident Sasquatch family, usually expressed through exchanges of items such as food. (Yes, I know. Surpasses my threshold, too, though I’m not sure why, considering all those other anomalies we forteans happily embrace.) Believable or otherwise aside, the Sasquatch seems out of place, since even in the most outlandish reports the creatures do not act as if operating beyond an animal level of intelligence, unlike those supremely clever fairies, UFO abductors, or Mescalito equivalents.

In his immersion in these uncharted waters, Cutchin uncovers a number of what he takes to be patterns (though I doubt he would argue too vigorously if you took them to be random coincidences; who knows?). He observes: “Taken at face value, the foods involved in entity food cases correspond to a lacto vegetarian diet … a plant-based food regimen that incorporates dairy products.” Tracing varieties of this diet back to ancient Indian religious practices, he says they are traditionally associated with clairvoyance and visionary experience. The thread seems a little thin here, but Cutchin does not insist on its strength.

The arguments are put out there solely as thought stimulants. If nothing else, after reading the book you’ll never think of entity encounters in quite the same way. Fortean folklorist Thomas E Bullard provides the foreword, written with his characteristic wit.

“The usual efforts to understand the high-strangeness aspects of anomalies,” he remarks wryly, “typically begin with enthusiasm, only to end in exhaustion and confusion, the inquirer led astray and mired down much like the traditional victim of mischievous fairies.” Unusually, Cutchin keeps his head secured in a keen fortean appreciation of uncertainty and ambiguity, not to mention the likelihood that these phenomena are way beyond our understanding. A splendid job all around.

A TROJAN FEAST: The Food and Drink Offerings of Aliens, Faeries, and Sasquatch 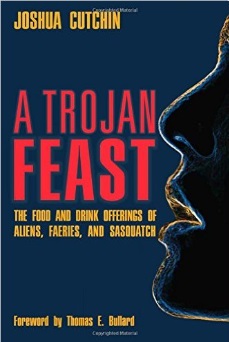